Love is our superpower. Meaningful conversations are our world.

“As in the psyche, so in the society.” – Debbie Happy Cohen

Why are vultures relevant to Joy-Based Living?

(It surprised me too!)

On a walk with my dog Hiro near a ridge on Lookout Mountain, I had a clear realization:

Joy-Based Living (JBL) is not about focusing on the positive. It’s about recognizing your belief in the negative, and undoing it. The result is Joy-Based Living. 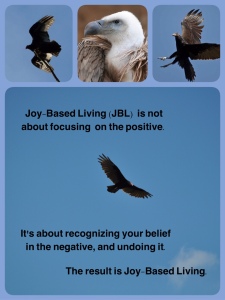 As this idea filled my mind, I looked up and there was a vulture flying very close by. It circled a few times, then glided away. A second and third vulture followed the first. I stood transfixed, completely amazed.

I reflected on the fact that if it weren’t for vultures doing their job – devouring carcasses – our natural world would be a very stinky and messy place. I felt deep appreciation for this strange, large bird.

Similarly, in Joy-Based Living, we are aiming to find those dead carcasses of negative feelings and beliefs that we continue to hold on to, so that we can let them go.  We aren’t trying to find JOY or PEACE or POWER. We are born with these qualities of being.

By surrendering the negative, we clear a canvas for the positive to emerge, which it NATURALLY does. Then we practice welcoming the positive.

In societies around the world, people wound each other through shame, abandonment and betrayal. What if there was a better way? What if we could release those old ways of being that may have helped us to survive up to this point, and UPGRADE how we treat one another (ourselves first and then others)… with embodied Languages of Well-Being which include healing fields of honor, commitment and loyalty.

As in the psyche, so in the society.

I find it really interesting that:

What if our version of an emotional filtration system is as simple as (gently and kindly) letting go of the negative and welcoming the positive each time they appear?

Rail against the common and customary.  Bliss out whilst hang-gliding in the high, bright skies. Rest in the unquestioning knowledge that all needs are laid at my feet.

Death on one level means life on another.

Learn more about participating in a Joy-Based Living Group by exploring this website.